SPRING RUNWAY REPORT
If the looks from the most famous designers of the runways show that Army, Black & White, ‘70s Redux, Denim, Flowers, and Lace are coming back this spring, you had better believe it. The models sporting the first peaks of coveted couture fashioned by the designers indicate that these are the looks that will most likely appear this season. Some of the designs from the runway may be a little eccentric, but that doesn’t mean that shoppers can’t get inspired to make their own swoon-worthy spring outfit!
The army look isn’t just meant for the battlefield. Designers such as Karl Lagerfeld (designer of Chanel) and Ralph Lauren arranged a military-inspired trend. Lauren used the workaday army jacket and combined it with a figure-flattering dress, in addition to jeweled accessories. Together, the combination formed a feminine-army style. Lagerfeld concluded with a piece daring to show that the flexibility of suede fatigue pants can also have a preeminent army look as well. Another designer such as Marc Jacobs created a silky general-like dress displayed by a war-serious model. Other outfits were in the colors of navy green and a faded cream. The designers featured many takes on button-downs , coats, and green suede dresses that look like they were made for a commander. These looks prove that with the right accessories and designs, one could win the war in best dressed. 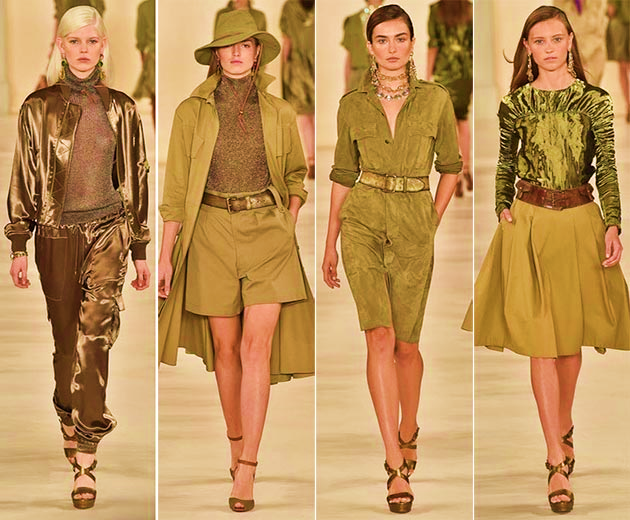 Black and white goes well with any outfit. It’s how one styles it that makes it unique. Designers such as Alexander Wang, Balenciaga, Balmain, Narciso Rodriguez, and J.W. Anderson displayed many more-than-ordinary patterns such as grid dresses, color-blocking, and cut-out designs. Versace presented a casual chic crop top with black shorts, which show its famous logo on the belt, and a fierce yet laid back blazer to finish of the most exclusive statement. These images give a futuristic look to black and white. So, yes, anyone can look good in the two colors, but styling them in these trends is what makes someone stand out.
A little more than thirty years ago, the 70’s Disco era was around. This time period was known for its beat enhanced music, style, and fashion! Prada put the image into place at the fashion shows with a leather trench coat, platforms and high-knee socks. Other designers rocked their 70’s looks, such as Emilio Pucci wearing a scarf tied around the neck and a matching pony-print blazer and pants topped with heels that stick out like a jet stream. Others went for a not-so-serious setup. Valentino, Etro, and Dries Van Norten went for a more hippy-ish look. For all of you hands free hand bag collectors an interesting aspect of the show was that these clothing artists captured the importance of the shoulder bag. Coming in colors such as umber and rich mahogany, there were ubiquitous long handled, rounded shape, metal hardware bags which were very popular in the 70’s and still proves to be today as well. These designers not only styled great outfit getups from the 70s, but they took us back in time as well! 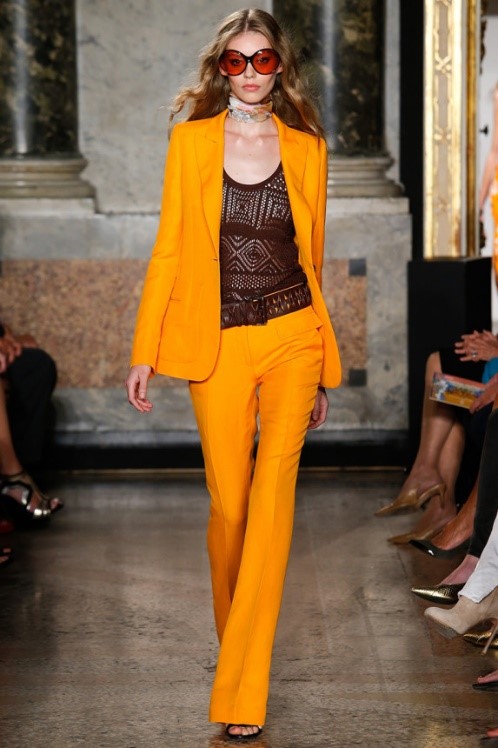 Many people know of denim: it’s used for jeans, skirts, and jackets. However, there are many more ways to wear it. The designer experts have proven how. Denim can be worn as a jacket-and-trouser combo, which is what was shown by Gucci, Tod’s, and Bottega Veneta. In addition, denim could also be worn as a jumpsuit. It may sound very risky, but with the right fit and some accentuating accessories, the look can easily be mistaken as an outfit for the cover of a magazine. To finish off, denim overalls are a must for this category. Some may not wear them, but others think of them as a way to change up one’s style. Long overalls would go great with a pair of cute heels, just to give some height and make the outfit a little more feminine. Heels or boots would put emphasis on a shorter pair of overalls. It’s still not too late to try something new with denim!
Floral is a widely known style that has been around for ages. Happily, it is coming back this spring, so why not try a new floral look? Miu Miu has convinced us that a flower skirt paired with a plain top and complementing heels can create a simple, lovely outfit that does not make one feel that they are at the florists. Several noted eye-catching styles were a matching three-piece jacket, crop top and skirt by Diane Von Furstenberg, a dark romper/dress designed by Saint Laurent, and a loose and long-flowing flower dress by Céline. Other designers put together cheerful bright pinks and reds into their dresses. In addition, brown, black and colorful platforms all over the runway frame and go well with the floral look. Floral is such a popular trend not seen in a while, since it’s returning in a big way, why not try something new and unique?
Another well-known style that is coming back this spring? In one word LACE. Many people love the look of lace, and there’s no questioning why; its style is g-ddess-like, clean, and sharp. Model Cara Delevingne styled a flowing lace dress along with black high-heel boots and a belt for Givenchy. Giorgio Armani put together a simple white dress with lace right in the middle of the dress. Oscar de la Renta designed a full-on lace dress with a metallic belt to make the look stand out, and Chanel put together a blouse dress with lace designs and a gold metallic statement belt and sneakers. In addition to the look, lace’s best friend, the gladiator shoe, was prevalent at the shows. If lace gives off the illusion of being goddess-like, gladiators complete the look 100%, especially really tall and strappy ones. Designers like Alexander McQueen and Valentino knew what was right and styled them at the runways. This look is not hard to create, yet it appears so stylish and elegant. Heads will be turning and everyone will be wondering where you went shopping to achieve your g-ddess like glow. 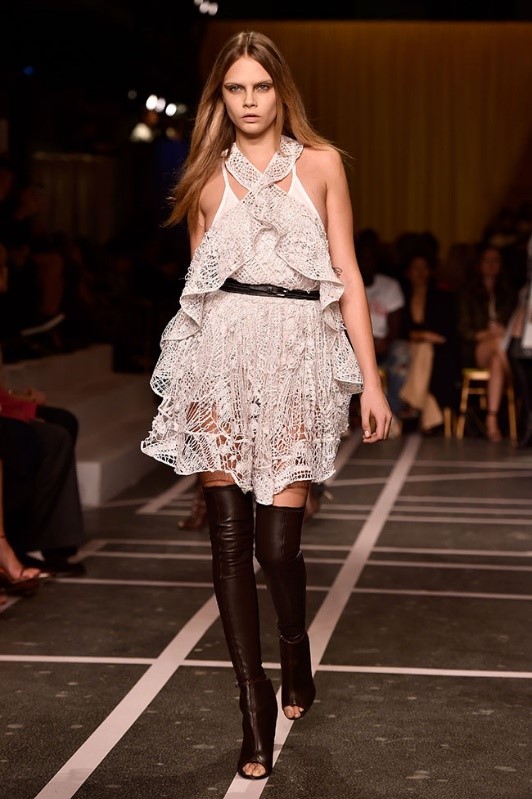 Now that you know Army, Black & White, ‘70s Redux, Denim, Flowers, and Lace are very big this spring, sign up for the military inspired pieces, contrast your styles, feel like a bohemian hippie, stop to smell the roses and be the g-oddess you knew you always were.